skip to main | skip to sidebar

Why 'Christian Hate?'? An introduction to the blog

The United Reformed Church is a significant Christian Aid donor. Through its "Commitment for Life" programme it raised over £400,000 for CA last year. It divides its donations into four equal parts, to be spent respectively in Bangladesh, Jamaica, Israel and the Occupied Palestinian Territories and Zimbabwe. This arrangement already tells us something about the way propaganda shapes the perceptions of the most well-meaning. It results in Palestinians getting about five times more per head than Zimbabweans, and getting on for fifty times more than Bangladeshis - and this despite the fact that Palestinians are on average significantly less poor than either Zimbabweans or Bangladeshis. OK, the Jamaicans do best of all, and I admit I have no theory to explain how the URC worked that one out, unless it simply reflects where they like to spend their holidays.

Christian Aid have produced briefings for the URC on the countries which its donations benefit. The one for Israel and the Occupied Palestinian Territories is here, and it starts like this:-

'The past year has been dominated by the conflict in Gaza and its aftermath. On 27 December 2008 Israel launched an aerial bombardment of the Gaza Strip, followed by a ground invasion a week later. The violence continued for 22 days, until a temporary ceasefire was put in place on 18 January. Christian Aid’s partners wasted no time in responding to the crisis, with the provision of medical relief, food distribution and counseling for children. But Israel’s continuing blockade of Gaza’s borders – which even before the conflict was severely exacerbating the poverty and suffering of the people of Gaza - continues to hamper the humanitarian response.'

Needless to say, it was entirely appropriate that Christian Aid should respond to the humanitarian emergency created by the fighting in Gaza. But humanitarian is never just humanitarian where Christian Aid's involvement in the Middle East is concerned - as the passage above demonstrates perfectly.

In this version of events there was no conflict, no violence until an Israeli bombardment began on 27 December. The rockets that fell in their hundreds in and around Sderot simply aren't part of the picture; apparently they fall outside Christian Aid's working definitions of 'conflict' and 'violence'. So, once the rockets have been excluded, Israel's actions in first blockading, then bombarding and invading Gaza become totally unprovoked, gratuitous acts of cruelty.

Argue that an invasion was the wrong response to the rockets and you potentially have my sympathy. Ditto if you argue that it took an unnecessary toll of civilian life. But if you present the invasion as unprovoked you've crossed the line in the sand. On the right side of the line what happens is the proper holding to account of all the parties in a long and complex conflict in which nobody has a monopoly of right. On the wrong side is the demonization of that state and the promotion of prejudice and hatred towards the people whose state it is. That there are a lot of people on the wrong side these days is no excuse for Christian Aid to be among them.

When you're looking from the wrong side of the line, you can see the children of Gaza need 'psycho-social support', but it doesn't occur to you to wonder what it's like to be a child in Sderot. You feel a need to support people who 'provide a supply of credible and up-to-date information to counter biased or misleading accounts in the Israeli media' - no need to worry about Gaza's media, which thanks to their Hamas minders always tell the truth, don't they?

And whilst you will be happy to associate Zimbabwe with images like this... 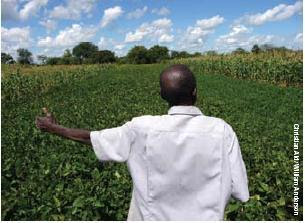 ...("A man surveying his crops with pride" from this leaflet) your preferred imagery for Israel and the Occupied Palestinian Territories will be like this...

'It is 6am and Rasheed Mohammed’s hands grip the metal bars at the main checkpoint between Bethlehem and Jerusalem. Like the 2,000 other Palestinian workers coming through this morning, his short commute to work is now far longer and far more difficult. It takes him through these bars; past Israeli soldiers with rifles; through two ID checks; and a metal detector.'

You will graciously concede to Israel 'the right and the duty to protect her citizens', but will have nothing to say about the cost of her pre-barrier inability to do so.

From the wrong side of the line in the sand you will not see any soldiers with rifles in Zimbabwe, and only your passing reference to 'bad governance' will hint at the realities of a country terrorized and reduced to penury by a despot. So you will have no thought of sending volunteers dressed in high-visibility jackets to monitor the country's human rights record. Save that for the evil Israelis.

I sometimes wonder whether 'Christian Hate?' was an overly provocative title for my blog. But not when I see material like this. And, yes, even the gentle souls of the United Reformed Church can be led to hate in the end, if they're fed enough lies. The evidence is for that proposition is in the long, bloody history of Christian anti-Semitism. If you don't believe me, it's time to do some reading.